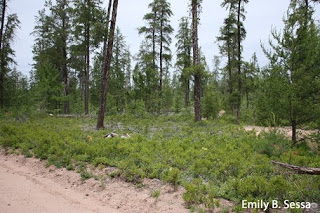 Another very interesting place, though rather devoid of ferns, was a section of sandy pine barrens inside the Huron Mountain Club. There was some Pteridium aquilinum, of course... bracken fern is ubiquitous pretty much everywhere. It has very deep rhizomes, which allow it to withstand fire and drought and persist in pretty desolate places. It was smaller here than I'm used to seeing it, and quite bright green. 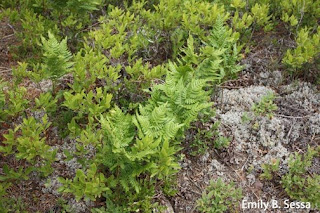 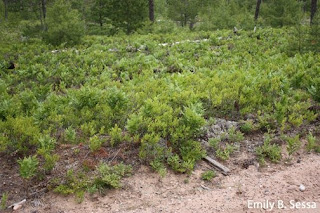 Posted by Emily at 12:45 AM No comments: Links to this post 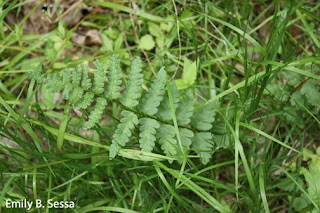 One of the best things that happened during our trip to the Hurons, in my opinion, was finding a great population of Dryopteris cristata, the crested wood/shield fern. This is another member of the group I study, and I had previously only seen it in one place: a small population on private property in North Carolina. We were given directions to a large, thriving population of it near Rush Lake in the Hurons. There were dozens of plants scattered around a swampy area with a stream running through it: 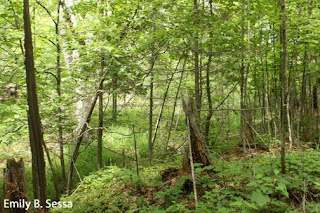 D. cristata is a beautiful fern, and rather distinct looking. Its fronds are very erect, held almost vertical, and the pinnae resemble venetian blinds - rotated almost 180 degrees relative to the plane of the costa/rachis. This pinna-rotation is a unique character of this fern. One of the polyploid species it has parented, D. clintoniana, shares this character, but the pinnae aren't quite as horizontal as in D. cristata. 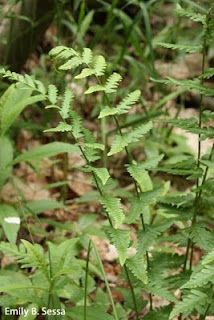 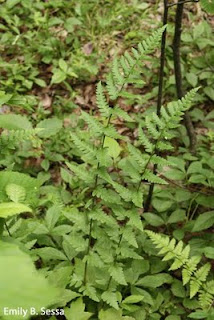 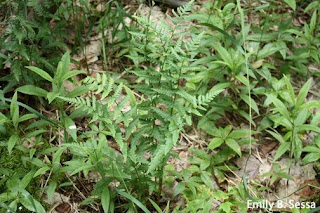 Posted by Emily at 12:32 AM No comments: Links to this post 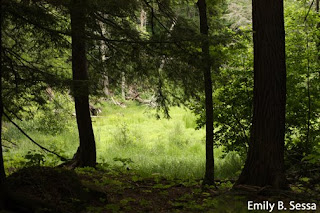 In early June my advisor and I visited the Huron Mountain area of Michigan's Upper Peninsula for a week of ferning. We were trying to relocate populations of Dryopteris in the area that were identified in the 1960s by legendary pteridologists Herb Wagner and Dale Hagenah, both from Michigan. They located populations of seven species of Dryopteris in the Hurons, and there are at least two other species that can be found elsewhere in the U.P., which makes it one of the richest areas on the continent for the genus. We weren't successful in all of our searches, but we did find beautiful populations of two rarer species, which will hopefully become field sites for my dissertation research.
We were looking for these ferns on the lands of the privately-owned Huron Mountain Club, which is very supportive of scientific research, and funds the Huron Mountain Wildlife Foundation. The HMWF graciously allowed us to use their facilities. I'll do several posts about the ferns we found in different areas of the Club's lands, including around several of the lakes.
The first day there we sought out a swampy area between Rush and Howe lakes, where we found ferns in abundance, including Dryopteris intermedia and a probable hybrid between it and Dryopteris carthusiana (which is actually itself a hybrid involving D. intermedia). Here is Rush Lake, and the swamp is pictured up at the top: 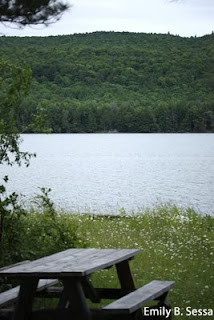 And this is the Dryopteris hybrid: 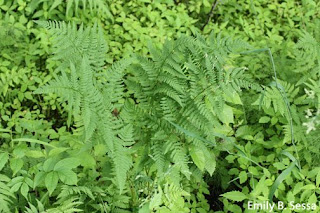 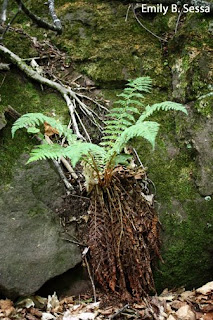 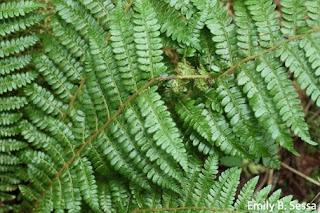 Posted by Emily at 2:39 PM No comments: Links to this post 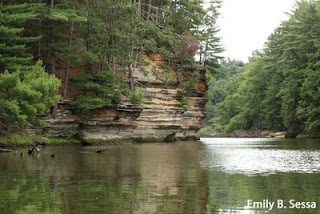 To most people who live in the Midwest, the Wisconsin Dells means one thing: waterparks. This is supposedly the waterpark capital of the world. Others, however, are attracted to the Dells for its stunning scenery and natural beauty. I first visited this area last fall to find Dryopteris fragrans, and I returned a few weeks ago with my labmate Phil to drop in on it again. I wanted to see the plant in a different season, and collect a fertile frond for a friend and colleague who is going to try and grow it for our research projects. The Dells is very rich, and very different from the rest of the state. As I explained in the post linked above, the river channels allow cold air to flow down from farther north, so many plants survive there that otherwise couldn't make it in mid-southern Wisconsin. The river channels, with their sun-exposed, weathered sandstone cliffs, also provide habitat for epipetric, or rock-growing plants. The rocks themselves are quite stunning too:

Here are some of the cool ferns we found growing on the rocks: 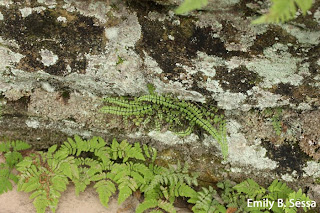 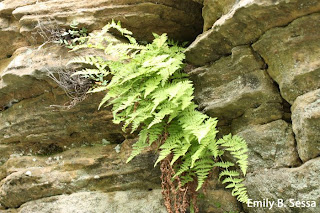 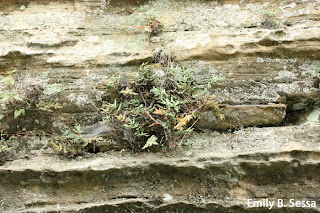 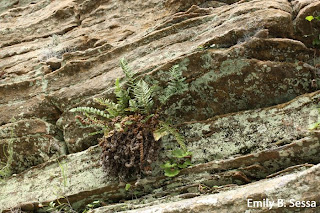 And of course, Dryopteris fragrans
Posted by Emily at 2:09 PM No comments: Links to this post 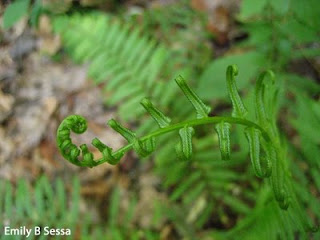 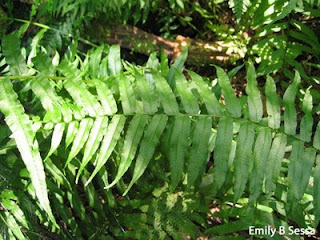 Another place I visited while exploring the south in June was a cove along Panther Creek in northeastern Georgia. We went there last summer as well and it's an incredible place. After crossing the creek, which is knee-high at this point, and taking a short walk through the woods, we arrived at this particular, very rich cove, where the ferns are large and abundant. The dominant species along the stream bed that runs down the floor of the ravine are Diplazium pycnocarpon (Glade Fern), pictured above, and Dryopteris celsa (Log Fern), the first two photos below. Both achieve impressive stature here. Other species to be found include Deparia acrostichoides (Silvery spleenwort), Adiantum pedatum (Maidenhair Fern) (bottom picture), and a species of Cystopteris. 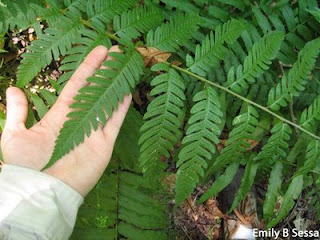 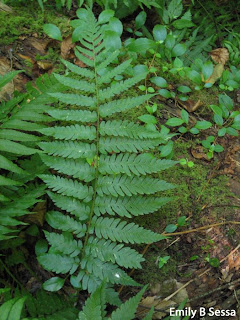 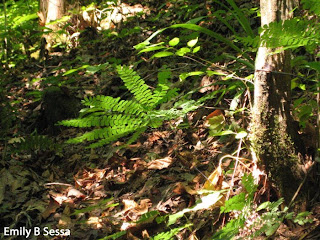 Posted by Emily at 5:37 PM No comments: Links to this post