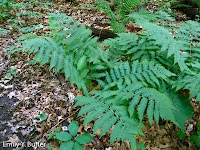 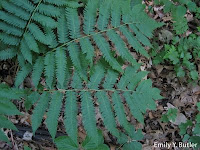 I'm settling into our very comfortable temporary home in Alexandria, Virginia, from whence I'll be commuting to the Smithsonian starting tomorrow. We're only about a mile from the Pentagon - exciting! I wonder if they ever think about ferns in there...
Pictured above is Goldie's Fern, Dryopteris goldiana, photographed in the UW-Madison Arboretum. We saw quite a lot of it on the walk I led the other day; it loves moist, rich, shady forest understories, and so is very happy in the Arb's Gallistel Woods. Unfortunately so are the mosquitos, but that's another story.
We were wondering about the specific epithet of this fern, goldiana, and where it and the common name came from. Kathy Miner, who is in charge of Educational Programs at the Arboretum and facilitated the scheduling of the fern walk, did some digging and discovered that it was named for John Goldie, a 19th-century Scottish botanist who came to North America several times to conduct research and field trips. He made his first visit in 1817, when he was 22, and in 1819 he walked from Montreal to Philadelphia and back. It was during this second trip that he collected a specimen of what would come to be known as Goldia's Fern, D. goldiana. He also kept a diary during this journey, which was later published by his granddaughter as "Diary of a Journey Through Upper Canada and Some of the New England States, 1819." Kathy discovered that this slim volume is still available through some rare and antique book dealers, so I'm going to try and acquire a copy! Goldie was a protege of the great botanist Sir William J. Hooker (father of Sir Joseph Dalton Hooker, Darwin's botanical ally and perhaps the first person to hear his ideas on natural selection). He was also very interested in the Niagara region, as were many other influential botanists and geologists of the time, including Charles Lyell.
The Missouri Botanical Garden has an interesting reprint online about John Goldie's North American travels, geology, and the state of evolutionary theory during this part of the 1800s, and there is a short biography of him available from the Peel Teaching Garden's website.
Posted by Emily at 11:35 AM No comments: 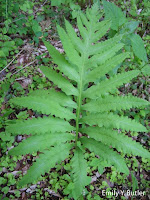 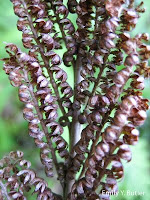 This morning I led a fern walk for guides at the UW-Madison Arboretum, a fantastic place located in the heart of Madison and close to the campus. It is a collection of managed forest, wetland, and grassland community types, and one of my favorite places in the city. We had a fun time walking and looking for ferns, despite the hordes of mosquitos that descend as soon as you set foot in the woods. We found, among other things, a thriving patch of the fern pictured above, Onoclea sensibilis (Sensitive Fern), although its fertile fronds (right photo) weren't out yet in the Arb. Other ferns encountered included Dryopteris goldiana and D. intermedia (Goldie's and Intermediate Ferns), Osmunda regalis (Royal Fern), and lots of Athyrium filix-femina (Lady Fern) and Matteuccia struthiopteris (Ostrich Fern). Things are very lush at this time of year, and most of the ferns we saw were very happy! I hope to do more walks like this in the future.
Posted by Emily at 10:41 PM No comments: 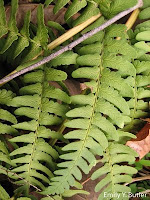 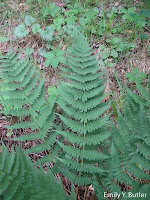 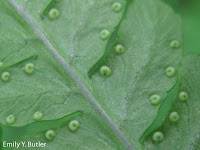 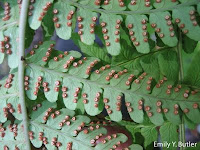 As I mentioned last week, Dryopteris marginalis is probably my favorite species in this genus. Its frond coloration is striking, and its appearance overall is so unique that it's hard to misidentify or overlook this fern. Its specific epithet was inspired by the sori, which are located along the margins of the pinnules, thus it also satisfies my penchant for highly descriptive and sensible Latin plant names.
I leave Thursday for Washington, DC, where I will be doing a fellowship at the Smithsonian Institution for several weeks over the course of the summer. It should be a fantastic experience, and I'm looking forward to working with some great people in the fern community while I'm there. I will post as often as I can about working with and collecting ferns in the DC area, and hopefully I'll have some good stories to tell along the way. Wish me luck!
Posted by Emily at 11:22 AM 1 comment: 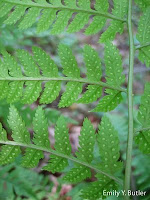 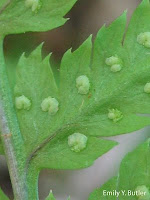 The last post in this mini-series (for now at least) on Dryopteris sori: D. carthusiana, the Spinulose or Toothed Wood Fern. It is a close relative of D. intermedia, which is one of its parents. D. carthusiana's other parent, however, is unknown, but is posited to be a mythical beast known as "Dryopteris semicristata", always written in quotations because it has never been seen and is therefore only hypothetical. This fabled fern, which many pteridologists have hunted but none have found, is also a parent of D. cristata, the Crested Wood Fern. I think The Quest for Semicristata would be a good subtitle for the next Indiana Jones installation, or perhaps just a chapter heading in my thesis one day.
Posted by Emily at 11:52 AM No comments: 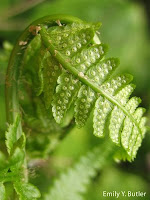 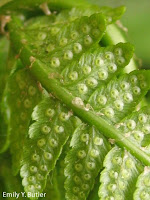 More Dryopteris sori, this time from Clinton's Wood Fern, Dryopteris clintoniana. These plants were growing up to three feet tall around the edges of a swamp in McLean, New York, near Ithaca.
Posted by Emily at 11:49 AM No comments: 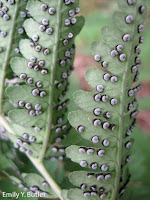 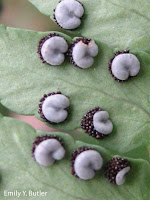 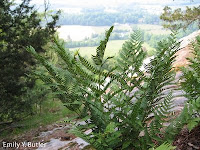 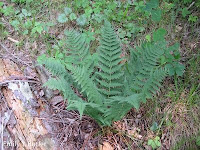 One more Dryopteris post tonight. This is Dryopteris marginalis, the Marginal Wood Fern, so named for the sori that are found along the margins of the pinnules, as you can see in the top two photos. D. marginalis is perhaps my favorite species in the group; its sori are beautiful and make it easy to identify, and the fronds range in hue from a bright green to an almost iridescent bluish color. The lower photos show two lovely crown-shaped specimens in dry, rocky woods atop Glass Mountain in South Carolina.
Posted by Emily at 12:20 AM No comments: 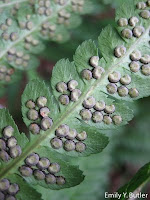 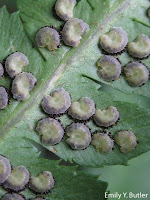 I've been remiss in blogging during the past few weeks due to lots of time spent in the car, crossing large swaths of the country. But it was worth it for the ferns! I saw a lot of beautiful things down in Virginia and the Carolinas, and I think it's time I do a post (or several) on the group I actually study: Dryopteris, or the Wood Ferns. There are approximately 250 species of Dryopteris worldwide, with 14 or so here in North America. They are exceptionally beautiful ferns, and I decided to start with some of their loveliest features: their sori. The fern pictured above is Dryopteris intermedia, grown in the gardens at Crow Dog Native Ferns from wild-collected spores. The indusia are the whitish clamshells, and the shiny black sporangia peeking out from beneath them indicate that the spores are ripe and ready to dehisce. This would be the perfect time to collect spores from this plant to sow and grow.
Posted by Emily at 12:07 AM No comments: 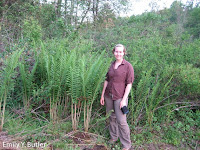 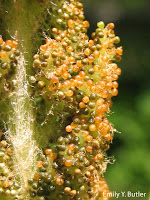 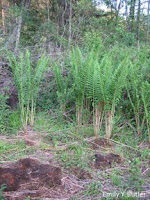 As promised, a post on Cinnamon Fern, and not just any Cinnamon Fern: HUGE Cinnamon Fern! I came upon the pictured stand of these giants on Wednesday, in North Carolina, where I was fern-hunting with Tom Goforth of Crow Dog Native Ferns (about whom much more later). We saw these from the car in a recently cleared road-side depression, and stopped to check them out. They are the largest specimens of this species I've ever seen. Cinnamons are easily identified by their "wands," the erect and stick-like cinnamon-colored fertile fronds that emerge among the green sterile fronds and release spores in early summer. You can see individual sporangia in the photo at lower left, and you can just make out some of the dehisced and curled up wands near the base of the plants I'm standing beside. They are very common in moist areas and can often be seen along roadsides.
This genus is also interesting because it has been recently renamed. It is a member of the family Osmundaceae, which also includes the common Interrupted Fern (Osmunda claytoniana, subject of a previous post) and Royal Fern (Osmunda regalis). Until recently, Cinnamon Fern was included in the same genus as these two, but was reclassified into its own genus, Osmundastrum (making it Osmundastrum cinnamomea) after a January paper published in the journal Systematic Botany.
Posted by Emily at 2:30 PM 1 comment:

Sori, I didn't see you there 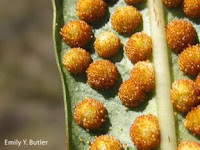 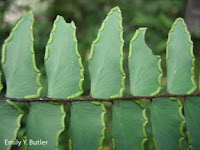 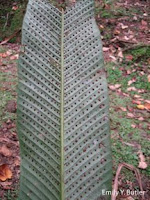 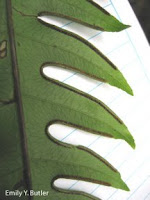 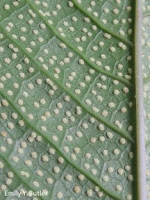 A long overdue post on these beautiful, useful, and often-overlooked (though not by professional fern fanciers) structures found on the lower (abaxial) surface of many fern fronds: the sori. A sorus (singular) is a cluster of sporangia, which are very small spore-bearing sacs. So: each of the colored "dots" in some of the above photos is actually made up of many smaller "dots" which actually contain the plant's spores. The individual sporangia are actually visible in the first image, which is a Costa Rican Campyloneurum species.
Sori are often round (as in the first, third, and last images, of Campyloneurum, Niphidium, and Tectaria, respectively), but may also be linear (second and fourth, Adiantum and Pteris), and some groups of ferns have more complex cup-shaped or valved sori. Another important structure when considering sori is the indusium, a piece of tissue that may sit on top of or surrounds the sorus. To complicate matters further, some ferns, like the Adiantum pictured in image #2 at top right, have what is known as a false indusium; their sori are surrounded by an indusium-like flap, but it is not derived from the same source as a true indusium.
The presence and shape of the sori, and the presence or absence of indusia, are some of the most important characters to consider when trying to identify a fern, as they are very often specific to families or genera, or even to a certain species. For example, all members of the genus Adiantum have a false indusium that is simply the edge of the leaf rolled over the sori, and this single diagnostic feature is extremely helpful in positively identifying a fern as a member of this genus.
Well-meaning but uninformed folk sometimes mistake sori for fungal or insect infections on leaves, and scrape them off thinking that they're doing the plant a favor. Big mistake! Doing so could potentially destroy a fern's entire reproductive output if the scraping were thorough enough. And besides, then you couldn't enjoy looking at them anymore.
Posted by Emily at 8:53 PM 1 comment: