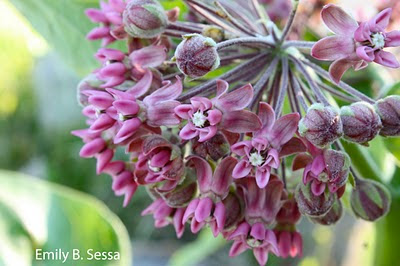 I thought I'd start a short series about this summer's research trip to the Huron Mountains in Michigan with all the neat non-fern photos I got during the three weeks we spent there. First up is this beautiful milkweed, Asclepias syriaca. There's a row of them right in front of the house where researchers stay while working there, and they were a buzzing hub throughout our visit. Other flowers of note included this pink lady's slipper, Cypripedium acaule, and colombine, Aquilegia canadensis. 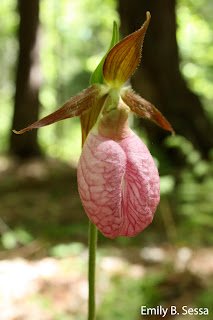 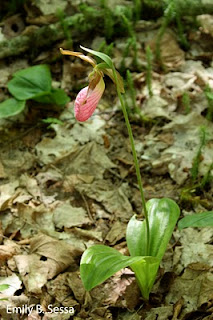 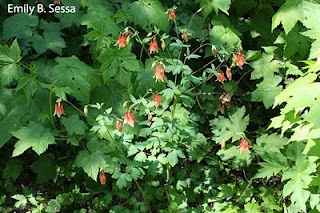 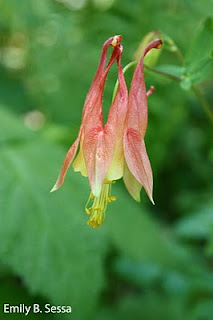 There's also abundant wildlife, including a rumored wolf, although we never (thankfully?) encountered it. Lots of butterflies though, and loons that paid nightly visits to the house where we stayed. There were also sandhill cranes, and are they ever loud! 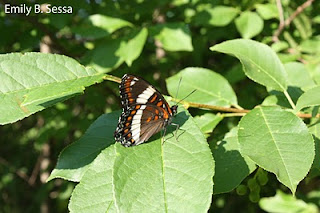 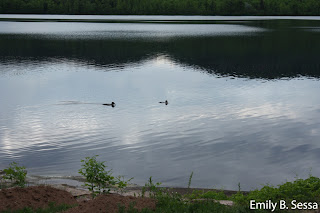 There are many beautiful, unobstructed views in the Hurons, like these from the top of Mummy Mountain, looking out over Second Pine Lake. The last photo is the view from the porch of the researchers' house at sunset. 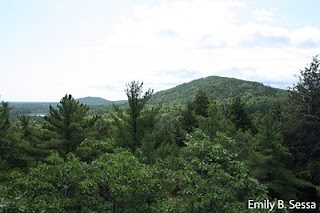 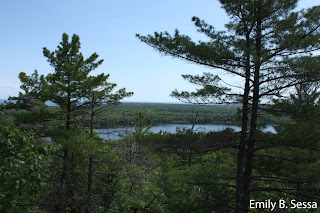 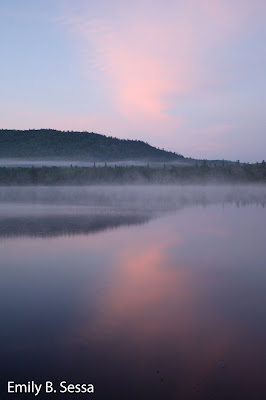 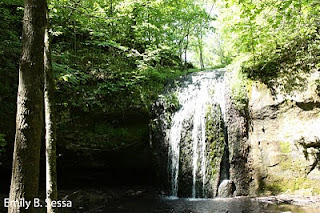 There's one area of Governor Dodge State Park where a trail leads through the woods to a large waterfall, and then follows the stream leading away from the falls through luxuriant, shady, rich forest. In the spray zone around the falls we found lots of Cystopteris bulbifera, the bulblet bladder fern. This is another neat fern I haven't blogged about before. It creates bulblets on the abaxial (underside) of its fronds, which can fall off and grow into new sporophytes, essentially clones of the parent plants. You can see one clearly in the top photo: 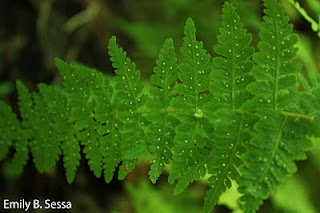 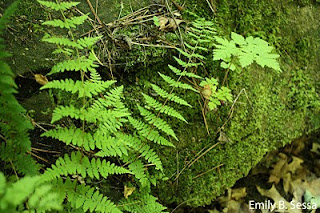 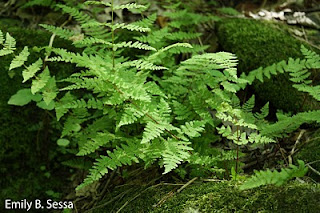 This is the type of environment where we found these guys. The walls of this gorge were just dripping with ferns. Lots of Dryopteris, some Osmunda, and a few boulders covered in Asplenium rhizophyllum, pictured at bottom. 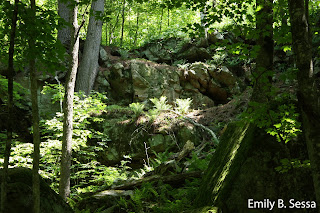 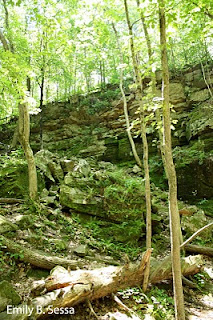 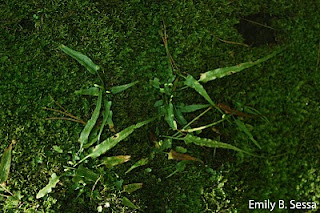 Another new fern for me in Governor Dodge was Asplenium pinnatifidum (this was a great field trip!). This is another exciting one for several reasons. First, it's a polyploid, and I have a soft spot for polyploids - the group I study has lots of them, and they're just neat. Second, over a year ago I wrote about finding four species of Asplenium on another field trip, and that it was cool because they were all members of the "Asplenium triangle" of hybridizing and interrelated Asplenium species in North America. Well, A. pinnatifidum is another member of that complex. It is thought to be an allotetraploid (meaning that it's two genomes were contributed by two different parental species). The triangle figure is below, modified from the figure in the Flora of North America, volume 2. In the figure, the solid circles represent diploid taxa, the open circles are fertile polyploids, and the triangles are sterile hybrids. A. pinnatifidum falls on one of the lines connecting two diploids, which are its two putative parents, A. rhizophyllum and A. montanum: 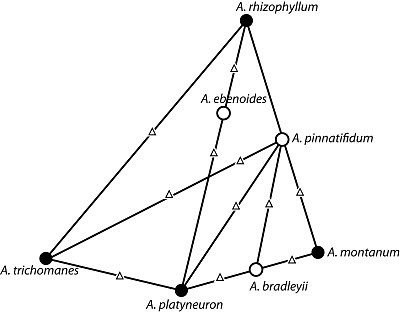 Below are the A. pinnatifidum individuals we found at Gov. Dodge, as well as a habitat shot of the sort of rock crevices we found them in. They weren't in the best shape, and apparently some of them had actually been out-planted there in an attempt to rejuvenate an existing, natural population. Hopefully this was just a bad year or season, and they'll pick up again soon. It's neat to come across such a rarity. 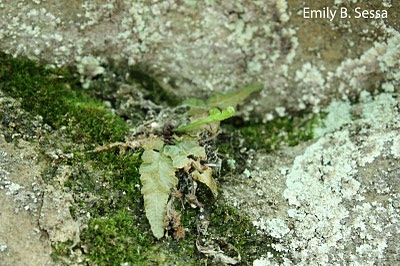 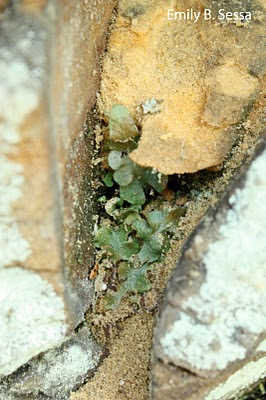 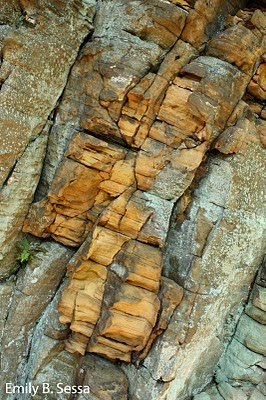 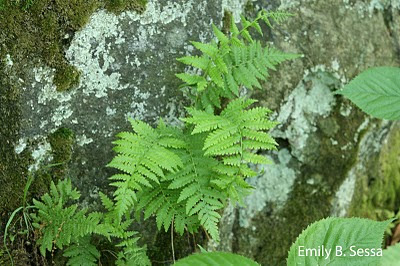 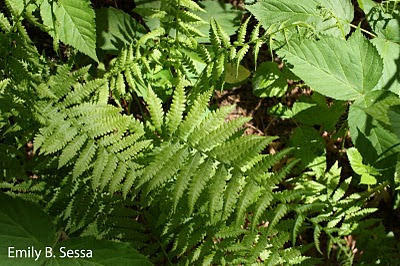 Another early-summer field trip brought me for the first time to Governor Dodge State Park. I'm embarrassed to admit it's taken me this long to get out there. It's a beautiful park and only about an hour's drive from Madison. Not only were there beautiful ferns and flowers, but also gorgeous sandstone rock formations (some of them complete with Dryopteris):

As a result of all these rocks, the soils in this part of Wisconsin are often very sandy, and we found a lot of Dryopteris intermedia and D. carthusiana (pictured just below). That makes it a great place to photograph this mother-and-daughter pair together for easier comparison (second photo below; D. intermedia on the left and D. carthusiana on the right). 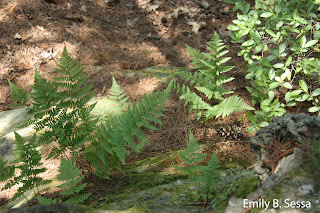 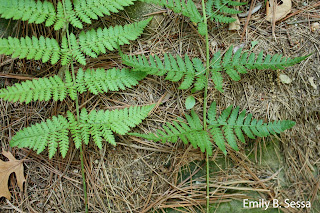 Another beautiful fern find was Woodsia ilvensis, and there were also some lovely flowers in bloom as well, including the Stellaria and Lupinus also pictured below. My next couple blog posts will be about specific interesting ferns that we found in Governor Dodge. 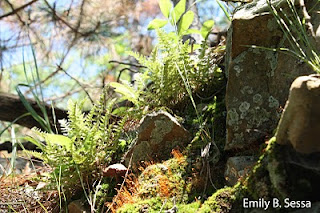 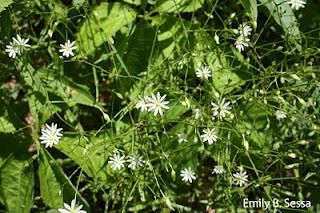 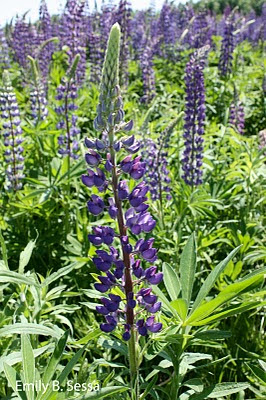 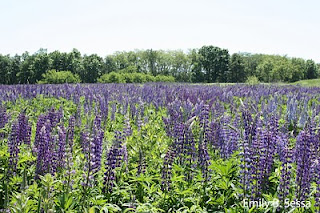