The Portuguese word samambaia translates as fern. Apparently there is a particular fern found in the rainforests of Brazil that is traditionally known as samambaia, and a powder derived from it is used for its therapeutic properties to treat an abundance of conditions ranging from bronchitis to Alzheimer's. You can see a complete list at this site, though I have to recommend against purchasing the powder in favor of seeking modern medical advice if you have any of those ailments. It appears from the pictures I've found at that site and others that samambaia is a species of Phlebodium (which is not the same as Polypodium, despite what the linked site claims).

Whatever its scientific identity, samambaia has prompted more than medical miracles: in 2003 cellist Yo-Yo Ma released the album Obrigado Brazil, which contains a track entitled Samambaia. The piece was inspired by, you guessed it: the Brazilian rainforest ferns he encountered while in the country.

You can hear this lovely piece of music for free, and read an NPR Morning Edition interview with Yo-Yo about the album and its inspiration at NPR's site.
Posted by Emily at 10:19 AM 1 comment: 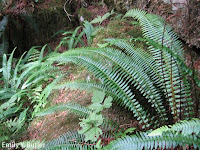 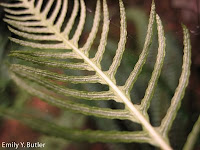 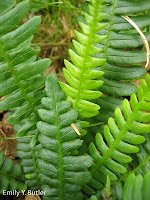 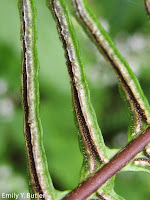 Another beautiful fern from my summer travels in Vancouver, this is Blechnum spicant. It has separate sterile and fertile fronds; the sterile ones look like regular leaves, while the fertile fronds are contracted and taken up by spore-holding linear sori (lower right photo). This is a common fern in the temperate rainforests of the Northwest.
Posted by Emily at 9:37 AM 1 comment: