We found two species of Cyrtomium in the Mauna Loa Bird Park near Volcano National Park. I'm very partial to this genus because it's commonly found in greenhouses and botanical garden conservatories where they want to create a very tropical-feeling environment, but it's rarely labelled. It also doesn't look much like a fern unless you turn it over and notice the sori.
This is Cyrtomium caryotideum: 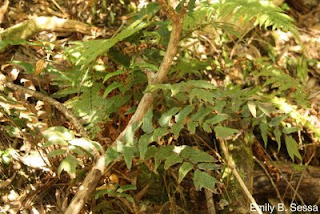 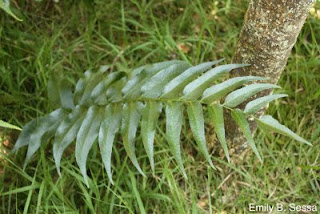 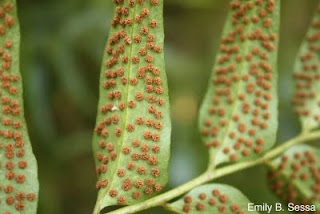 Another important genus of ferns in Hawaii is Asplenium. This group is found throughout the tropics, and there are several species in the Hawaiian islands. Asplenium species have linear sori, which can be found in other genera as well, but they can help you figure out if something could be an Asplenium: 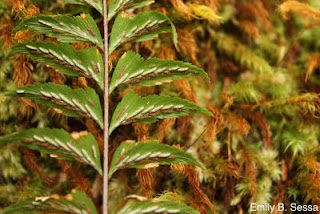 The overall shape of the pinnae in Asplenium can also help to identify them. They are usually once pinnate to twice pinnate, or anywhere in between, as you can see in the photos below. 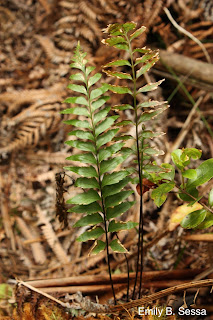 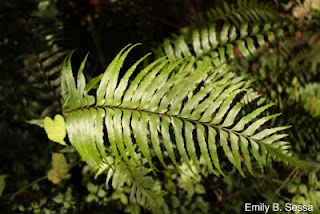 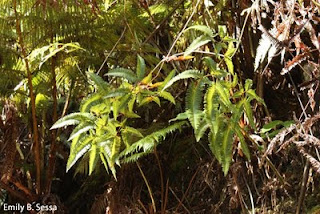 This will be the first in a many-post series about various genera of ferns out here on Hawaii. First up is Dicranopteris, one of the most ubiquitous ferns you'll find at low, moist elevations. As you can see from the two photos below, it will drape itself across large swaths of vegetation, absolutely coating them.

Dicranopteris is really beautiful up close, especially when it's young. Its fiddleheads are purplish, and often sport golden or orangeish hairs or scales: 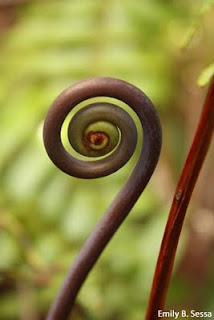 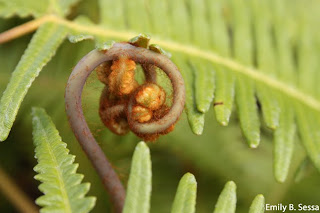 It has a unique growth pattern, unlike most other ferns. It initially sends up one unbranched frond, with fiddlehead, that unfurls and continues growing upward. Eventually, the upward movement stops and the fiddlehead/bud goes dormant. Just below it, two additional buds emerge and strike out sideways, almost at right angles from the original bud. These grow for awhile until they, too, eventually stop, and the process happens over again. This leads to the draping effect, as the fern basically continuously grows outward. (This description is based on the one in Daniel Palmer's Hawai'i's Ferns and Fern Allies book, published in 2003 by University of Hawaii-Honolulu. It's a great book - get a copy if you're visiting Hawaii or want more information on its ferns.) Another effect of this growth form is that there always seem to be little fronds unfurling somewhere on a Dicranopteris:

You can see its sori in the bottom right photo. The species shown in all of these photos is the only one on Hawaii, Dicranopteris linearis. Incidentally, this is one of the only ferns out here I can identify to species, because there's only one of them. Most of the ferns in the following posts I can only get to genus without a lot more work with the keys.
Posted by Emily at 3:09 PM No comments: From Snowbird and the Botany conference, I flew directly to Hawaii with my advisor. We're spending about ten days here collecting data on the Hawaiian lobeliads and, in my case, happily fern-spotting. There are about 225 species of ferns native to the Hawaiian islands, and we've seen many just in the few days we've been here. The most striking and obvious are the tree ferns, which are everywhere. The most common ones are several species of Cibotium (Cibotiaceae) and Sadleria (Blechnaceae). The fiddlehead above, my favorite of the photos I've taken so far on this trip, is a Cibotium. Here are some more views of it:

I haven't yet learned to tell apart the species. Sadleria is easier: the species pictured below is S. cyatheoides. The "cyathe...etc" in its name is found in many names that concern tree ferns, like Cyatheales, one of two large orders of leptosporangiate ferns that contains the two largest tree fern families, Dicksoniaceae and Cyatheaceae (there it is again!). Neither Sadleria nor Cibotium is in these families; Cibotium is in its own family, Cibotiaceae, which is in Cyatheales, but Sadleria is in the family Blechnaceae, which is in the other large order of leptosporangiates, Polypodiales. 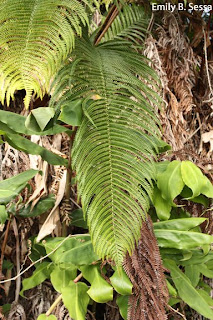 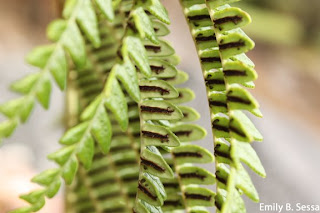 Sadleria doesn't look much like the Blechnum species I'm familiar with (like Blechnum spicant), but a characteristic of many genera in the family Blechnaceae is the presence of linear sori, which you can see on the abaxial (under) sides of these pinnae.
Other cool tree-like ferns can be found in the order Marattiales, which is a group in the "lower", eusporangiate ferns.
Posted by Emily at 6:30 PM No comments: 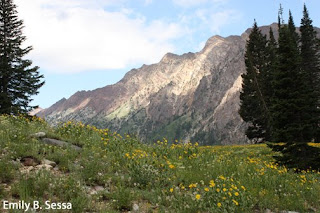 A brief break from fern posts: last week I was in Snowbird, Utah for the Botanical Society of America's annual Botany conference. Lots of talks, lots of mixing and mingling with friends and colleagues who only come together at this yearly event. And since the conference was in Utah, lots of mountains were available for climbing. On the last day before flying out, my labmate Phil and I took on one of the taller peaks. We hiked from the resort at an elevation of 8,125 feet, up to Hidden Peak, only 1.25 miles away but at the lofty height of 11,000 feet. It damn near killed me. But I have some beautiful photos to show for it. We only found one fern up there, a Cryptogramma species, so I'll focus instead on the beautiful wildflowers we found. Angiosperms have their day here on No Seeds! 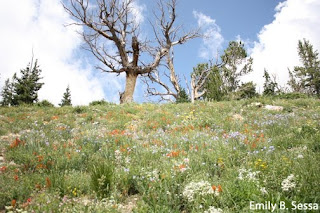 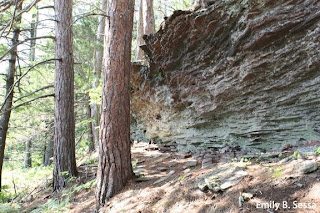 Dryopteris fragrans is one of my favorite ferns, for several reasons. First, it's in the group I study, so I sort of have to like it. But it's also very different from the other Dryopteris species, it's not closely related to anything else on this continent, and it's rather difficult to find, as it grows mostly in very cold climates at higher latitudes, like Alaska and northern Canada (see past posts on D. fragrans here and here for discussions of its occurrence in Wisconsin). Because of this last reason, I've only seen it twice in the wild, in the Wisconsin Dells, and it's a thrilling experience - I've read and thought about it so much that finding it is exhilarating. Imagine my euphoria, then, to paddle out to a thin peninsula in Rush Lake, disembark from our rowboat, climb along the lakeshore below the sandstone cliffs pictured above, and find DOZENS of healthy, robust, beautiful D. fragrans swaying in the breeze from their cliff perches. They are simply beautiful! 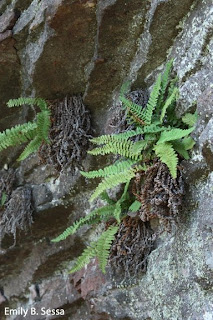 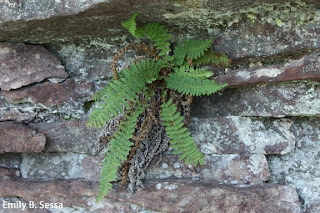 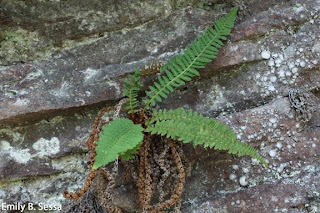 There were also some very adorable Polypodiums growing on the rocks: 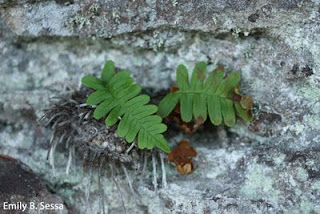