There is always a fern field trip at the annual Botany conference, and this year was no exception. These trips are a wonderful way to visit new places, see lots of ferns, and catch up with old friends. I look forward to them every summer. This year's trip took us west and a bit south of New Orleans, eventually to Avery Island, the home of Tabasco Sauce, among other things (gators, egrets... see below). We didn't see a huge number of fern species, but there were some exciting items on our "spotted" list, including Ceratopteris pteridoides, a close relative of the nearest thing we have in ferns to a model species - Ceratopteris richardii. I've never seen any Ceratopteris in the field before, so that was a fun siting. Here's the full list of species we saw, at least by my count:

And some photos of the ferns and folks that day: 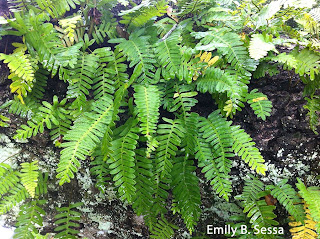 The following photos are of Lygodium japonicum... a terribly invasive fern in parts of the southeastern U.S., but I have to admit that I have always found it awesome looking. There are relatively few true vining ferns, and the Lygodium species are among them. They have dimorphic leaves, with the fertile and sterile pinnae looking decidedly different (lower photo). There is also a native species, Lygodium palmatum, which I've seen in South Carolina. 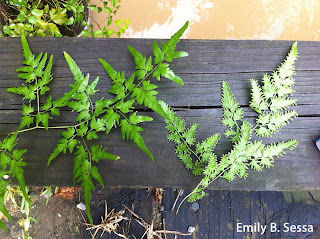 And always a great find - a gametophyte and baby sporophyte! ID unknown, even by the experts with us.
Finally, no field trip in the southeast is complete without alligators, apparently. There is a beautiful egret rookery on Avery Island that we stumbled upon as we rounded a corner - the trees in this swamp were filled with hundreds of snowy white birds (not sure, actually, if they were Snowy Egrets or another species). After admiring them for a few minutes we noticed that several log-like objects were moving through the water towards our party - never a good sign down in these parts. These were smallish gators, and were satisfied with watching us closely (as they usually are), though they swam alongside us at our walking pace as we turned to leave, like a reptilian escort away from (undoubtedly) their nesting grounds. Creepy. I wouldn't be an egret in that swamp if you paid me. 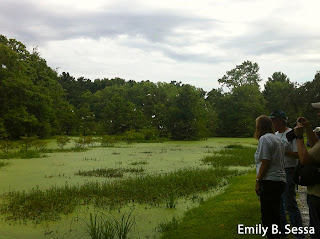 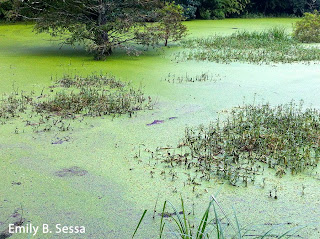 There are numerous wonderful plant blogs on the internet these days, a small sampling of which you can follow in the sidebar on the right of this page. There's a new addition to the list there, a blog by my friend and fellow fern-fancier Dr. Nathalie Nagalingum. Nathalie is based at the Royal Botanic Gardens in Sydney, Australia, and her research focuses on the evolution of ferns and cycads. She has spent the past several weeks traveling around North America, going to conferences, working at herbaria, and visiting old friends and haunts (Nathalie's academic journey has included stops at Berkeley, Duke, and Harvard). I was lucky enough to see her not once, but twice, first at Botany in New Orleans, and then in Gainesville when she stopped here for a few days. She has been chronicling her travels on her blog, and it's been great fun to follow along. She's currently in Mexico, where she's been seeing ruins and visiting the stunning UNAM herbarium - see her post about it for pictures! I'm flattered that I also got a mention - thanks Nathalie! Can't wait to see you again!
Posted by Emily at 11:25 AM No comments:

Last week was the Botany conference, an annual coming-together of plant scientists hosted by several professional societies including the Botanical Society of America, American Society of Plant Taxonomists, and American Fern Society. Botany is always a great place to catch up with old friends and colleagues, establish or check in on collaborations, and immerse oneself in all things plant science for about a week.

This year the meeting was held in New Orleans, and it was particularly wonderful, partly because I got to see many dear friends from Madison and grad school. At last year's conference I had just left Madison a few weeks prior, but now a year has passed and I hadn't realized how much I missed all those folks until we were reunited in NOLA. In addition, there were several great symposia and colloquia this year, including two focused on polyploidy, and the usual highlights of the Fern Society/Pteridological Section activities. This year these included the usual fern field trip on the Saturday preceding the conference (to be covered in another post), the standard Pteridological Section half-day of talks and American Fern Society lunch, and also a special colloquium called Frontiers in Fern Gametophyte Research (link goes to the schedule of talks). This was organized by my friends and collaborators Eddie Watkins and Josh Der, and it was great! The talks focused on various aspects of current fern gametophyte research, including physiology and light relations, hormones, chloroplast movement, and the issues involved in outbreeding when you have underground gametophytes, a challenge faced by members of the genus Botrychium. The Botrychium talk was given by Don Farrar, who was also the honoree of the colloquium - he has long worked on Botrychium (pictured below) and gametophytes, and for just as long has been an inspiration and friend to the entire fern community. 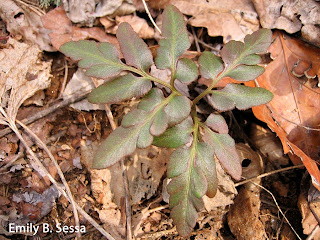 Another exciting, though more sober, happening at the meetings was a session called "Yes, Bobby, Evolution is Real!", a not-very-subtle callout of Louisiana's governor, Bobby Jindal, and Louisiana's blatantly unscientific Louisiana Science Education Act (LSEA), which mandates teaching "alternative explanations" for the origins of Earth's diversity. The session was picked up by many local news outlets and made its way to the HuffingtonPost, in an article that received over 5600 comments in less than 24 hours. Another Botany attendant and friend, Dr. Chris Martine, beautifully summarized the hubbub about the session and some of the relevant issues in evolution education in his own column at HuffPo. It's not often that Botany makes the headlines in such a big way, and I'm glad the conference contributed to this important discussion about the future of science education in America.