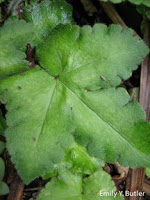 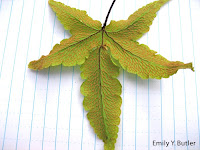 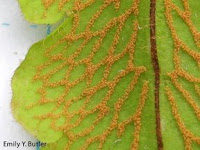 Another beautiful fern from Costa Rica, this is Hemionitis palmata, in the Pteridaceae. These fertile fronds were about 3.5 inches across, and shaped a little differently from the non-fertile frond shown at top left (which was also from a different plant). The non-fertile fronds seem to be mostly three-lobed, while the fertile fronds we saw were five-lobed. They are all very soft on the upper (adaxial) surface. The sori lack indusia, and typically form this linear, netted pattern. The common name of this species is 'starfern'.
Posted by Emily at 9:57 AM

do you know where i could purchase the plant or spores? It's gorgeous!
thanks,
shireen