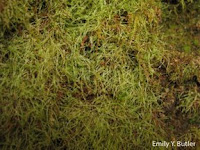 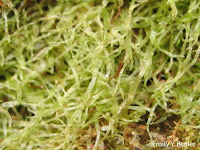 One of the best parts of this recent Smokies trip was hunting for a rare filmy fern gametophyte under a bunch of boulders somewhere in North Carolina. My advisor (who led the trip) had a tip-off that filmy ferns could be found in the vicinity of a particular bridge that crossed a rushing stream, so we parked and spent an hour or so clambering over moss-covered boulders the size of buses, and eventually we were successful! I'm still not sure what species (or even genus) this is, but suffice it to say this is a Filmy Fern, a member of the family Hymenophyllaceae. It is likely either Trichomanes petersii (which we expected to find in that location) or Vittaria appalachiana.
The latter is very interesting because it is one of three species of Hymenophyllaceae in the eastern U.S. that has only a gametophyte generation - that is, it has done away entirely with the sporophyte, the big leafy part of the life cycle we are used to thinking of as a "fern." These species belong to mostly-tropical genera, and the hypothesis is that they are relicts left over in these locations from warmer times. Since their sporophytes cannot survive outside a limited geographic range, they have dispensed with them. The common name of the family, "Filmy Ferns," derives from the fact that the tissue of these ferns is often very thin, only one or a few cell layers thick, and they typically live in very moist environments where they are continuously wet. They have inspired some poetry, including this piece by botanical poet Dr. Giles Watson:
Hymenophyllum tunbringense
Not rooting, exactly,
but clinging; not breathing
through stomates, but through
a membrane so permeable
that not a glint, not a sunbeam
must fall, without she wither,
she is all delicacy, hanging
limp from a tree's root.
Quivering eternally
on the edge of desiccation,
viable only where air and water
are in equal titre,
the filmy-fern
is oh so like a soul.
Posted by Emily at 3:51 PM