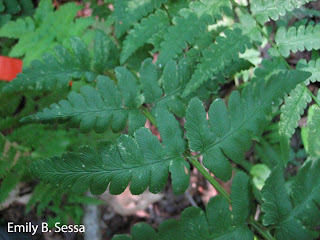 This summer the Botanical Society of America's annual conference was held in Providence, Rhode Island. As always, on the Saturday before the conference begins there are a number of field trips offered, and the American Fern Society usually co-hosts one. On this year's trip we went to several locations in Rhode Island and Massachusetts, and saw many of the common local ferns. One particular treat was seeing a Dryopteris hybrid I haven't seen before (which is surprising, since it's one of the more common ones). Dryopteris x boottii is a sterile hybrid between D. intermedia and D. cristata, the intermediate and crested woodferns.
There are clearly elements of both parents' morphology in this hybrid. The overall shape of the mature fronds resembles D. intermedia (first photo below), and the younger ones look like D. cristata (second photo below). The pinnae also have the unmistakable D. cristata-twist - they look like panes in a Venetian blind, each held horizontal relative to the rachis (see photo above). The plants are way too big to be just crested woodfern though, and there are occasional glands along the rachis and pinna blades that also identify the D. intermedia parent. 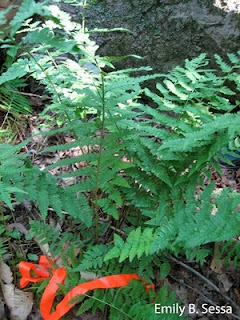 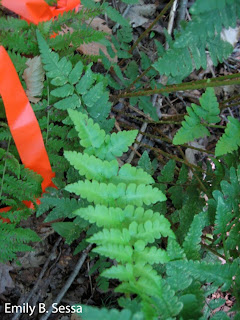 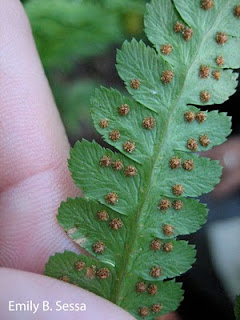