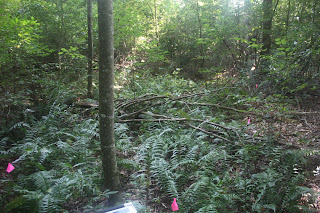 Prior to this last field trip I had only seen Dryopteris ludoviciana in the field once, near Darlington, South Carolina, a couple of years ago, and a major goal of this trip was to find it and measure it. It is the Dryopteris species in North America with the most restricted range, occurring only in the extreme southeast, along the coasts. It is also one of only four diploids involved in the North American reticulate complex, and it is thought to be involved in the parentage, either directly or indirectly, of three of the five allopolyploids in North America. So it was a high priority indeed! Luckily we found a huge, beautiful population of these ferns at the Nature Conservancy's Rocky Hock Swamp Forest Preserve in Hertford, NC, with the help of Raleigh, NC fern enthusiast Jessie Perry. Getting to the plants was no easy feat, and involved a trek across a soybean field followed by hacking our way through a forest - my equipment is many-parted and cumbersome, so in the end I think we were just as glad to be done with these plants as we had been to find them in the first place! It was a great find, though, and I'll remember this population for years to come. 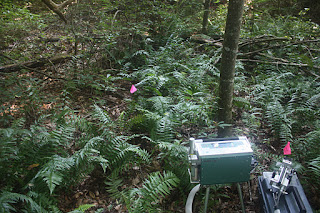