Ferns of the Central Amazon

A while back I posted about the Portuguese word samambaia, which means 'fern'. I thought about this lovely word again yesterday when a speaker in our weekly evolution seminar series mentioned a group of guides that have been published for various plant groups in the Amazon - including the ferns!

This fern key is fantastic. It covers 125 taxa found in the central Amazon of Brazil, in the Reserva Biológica do Uatumã, an almost one million hectare reserve that was built in response to the construction of a dam that had pervasive environmental impacts in the region. It is located in the northeastern corner of the state of Amazonas, not too far from Manaus. The reserve is now a resource for research and education. 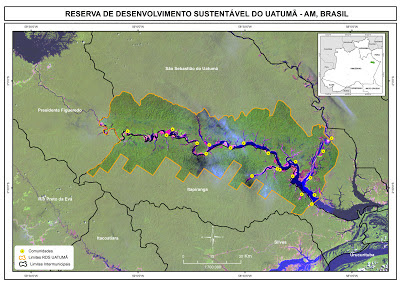 Map from the Institute for Conservation and Sustainable Development of Amazonas

The fern guide is very comprehensive, and has a built in key that will allow you to use almost any feature of the plant that might be available to you, including habit, various features of the sori, and a number of characteristics of either the sterile or fertile fronds (which happily are separate categories - these folks really know ferns!). 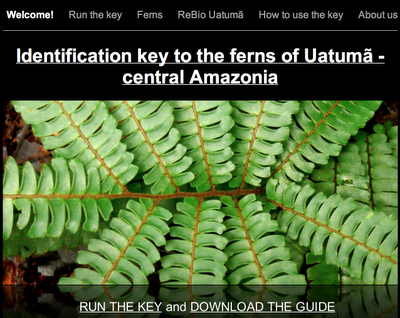 Identification key to the ferns of Uatumã

In addition to this interactive key (which is a Java app), there are also two beautiful PDF guides that you could print out for your next Amazonian adventure. One is a PDF version of a gorgeous book, which I happened to pick up a hardcopy of at a conference a few years ago, called Guide to the Ferns and Lycophytes of Rebio Uatumã (below left). The other is a grid of photos of common ferns in the Reserve (below right). The latter would be more amenable to printing and laminating for a visit to the rainforest. 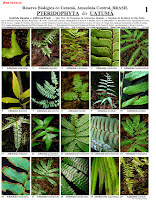 If you're interested in guides to other plant groups in Brazil, check out the website of the Brazilian branch of PPBio. PPBio is the Program for Planned Biodiversity and Ecosystem Research, which operates in Brazil and elsewhere. The site is in Portuguese, but the guide page has cover photos for each group that you can use to find what you're looking for. In addition to ferns they have guides for Zingiberales, Fabaceae, and also lizards.
Posted by Emily at 11:24 AM