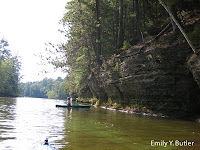 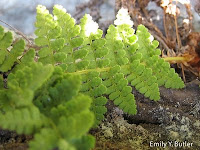 My dissertation research is on the North American species of the genus Dryopteris, the wood ferns (I may have mentioned this once or twice before), and my goal for this past summer was to collect all fourteen or so of the species found on this continent. I succeeded, except for two: D. ludoviciana, which is restricted to the far southeast (mostly Florida, coastal Alabama and Arkansas), and D. fragrans, which occurs mostly in the far northern part of the continent, up both coasts of Canada, to Greenland in the east and Alaska in the west. My travels didn't take me far enough north or south to collect these species. Then, a few weeks ago, my advisor put me in touch with an employee of the Wisconsin Department of Natural Resources, who had collected D. fragrans in central Wisconsin (!) a decade ago.

If you're at all familiar with the topography of Wisconsin, you know it's mostly flat. The state was almost entirely glaciated in the last ice age, and as the glaciers eventually retreated, they grated the sandstone bedrock down to a nice smooth plane. Except for in a few places... In the center of the state, for example, a gigantic lake was left behind, dammed by ice, which eventually broke. The entire lake drained in perhaps a matter of days, and the force of the water cut channels through the rock in an area now known as the Dells. Above is a picture of part of the Wisconsin River that runs through one such channel. The Dells are very unique in terms of plant life because they serve as conduits for cold air to flow from the northern part of the state down towards the south, and provide refugia for species that normally wouldn't be found in this part of the state because it's too warm/moist. Enter Dryopteris fragrans. 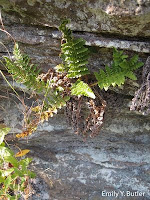 Upon learning that it might still be possible to find this fern in this unique location, I borrowed a kayak from a friend and off we went up the river to the cliffs pictured at the top. Lo and behold, we found it after only a few minutes of scanning those rocks! It's relatively small, and pretty dense, as ferns go. This is a plant meant to endure cold. Its most striking feature is that it's sticky; it gets its specific epithet, fragrans, from the fact that it is literally fragrant. It smells sort of piney, almost like Christmas, and the source of the scent is hundreds of glandular trichomes, tiny modified hairs all over the lower surface of the fronds that produce a sticky liquid substance (about whose chemical composition I haven't a clue). In these last two pictures you can see the shiny sheen of the lower leaf surface, and even some individual trichomes; they look like tiny clear crystal balls emerging from the edges of the pinnae. Really cool! 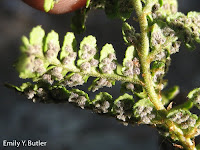 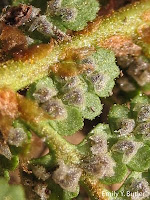