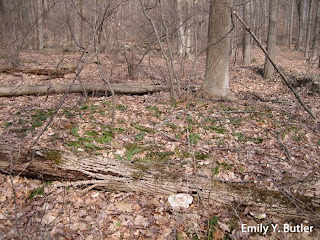 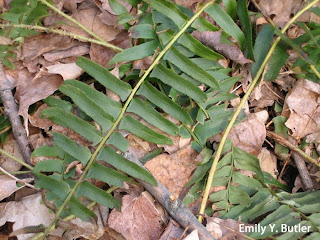 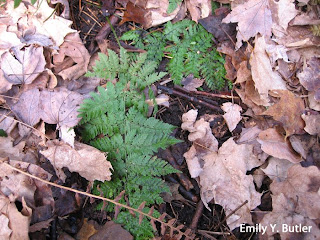 Now that the snow has melted and one can venture outside again, a feature of the late fall/early spring forest landscape you might notice is a surprising amount of green. This is due in part to evergreen ferns. These are a select set of species that drop their fronds to the ground in late fall, but keep them attached to the base of the plant, where they remain green through the winter months. There's actually a nifty mechanism by which this occurs: there is a joint right at the base of the frond that weakens at the appropriate time, so that the frond falls where it's been standing.
There are various hypotheses in the fern community about why these species do this. The consensus seems to be that having green, living fronds may allow them to jump-start photosynthesis in the spring when the snow melts and sunlight becomes available. Based on the ferns in the forest at my parents' house (where the above photos were taken), that seems like a reasonable theory. There are several species in the North American fern flora that do this, including Polystichum acrostichoides (middle photo, above; its common name, Christmas fern, reflects the fact that is a dark green color through late December) and Dryopteris intermedia (lower photo, above).
I should mention that these ferns aren't truly evergreen, in the sense that conifers are. Conifers hold their leaves through multiple growing seasons (although they do replace them eventually, usually once every 3-5 years). These ferns keep their fronds only until the next spring; when the fiddleheads start to emerge they will begin to senesce and disappear into the leaf litter.
Posted by Emily at 8:20 AM