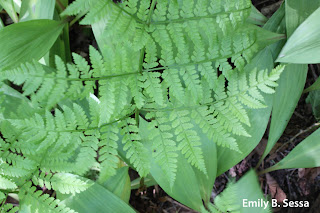 My most exciting fern find so far this year has definitely been locating Dryopteris expansa in northern Wisconsin. This is the only species which I should have been able to find a field site for, but have failed at finding for the last couple of years. I've seen D. expansa out west, in Washington and Oregon, but I need a site within driving distance to make the types of measurements I need for my research. This species is well-documented in northern Wisconsin and Michigan, but somehow I was never able to track down any of those populations, or they were gone from the sites where they previously occurred. But now, finally, with the help of some very nice folks from the Chequamegon-Nicolet National Forest, I've got not one, but two field locations of D. expansa! I will probably only be returning to one to make measurements in the next few weeks, but it's nice to know that the other is there. 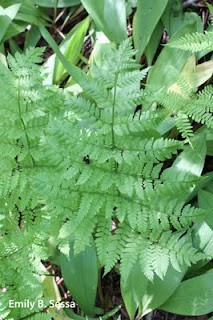 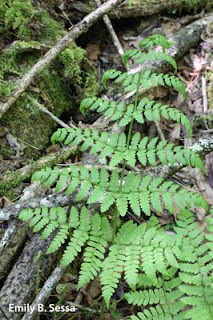 Like most Dryopteris, D. expansa is several times divided, and has a typical lacy, 'ferny' look to it. It's beautiful, needless to say. One stand-out character of this plant is the lowermost pair of pinnae, which are hugely triangular and expanded at the based (hence the species' specific epithet). The first innermost pinnule on the bottom (called basiscopic) is always the longest, as opposed to some other species of Dryopteris, where it is either always shortest, or varies considerably. The primary reason I was so anxious to find this species is that it is a diploid, and is one of two parents of a polyploid species called D. campyloptera. There are five sexual polyploid Dryopteris in the North American flora; of these, two have one parent that is unknown and probably extinct, leaving only three polyploids with both parents extant. Part of my work involves comparing the polyploids with their putative parents, and this is a very small sample size! So you can understand why finding this fern was so important to me - it was the only diploid parent of those three polyploids that was missing, so I now have the complete set for all three! 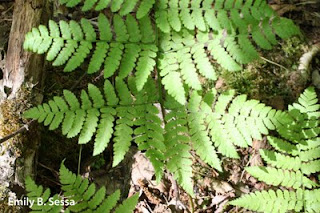 I'm measuring a number of characters related to light relations and photosynthesis for my research, and here's a shot of my photosynthesis equipment hard at work work on D. expansa: 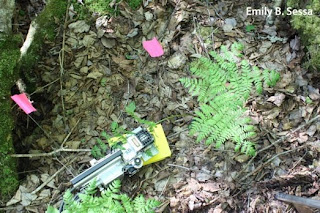 Wow that was an awesome presentation. You have a great writing style. Cheers you have a blog follower.
Keep Posting