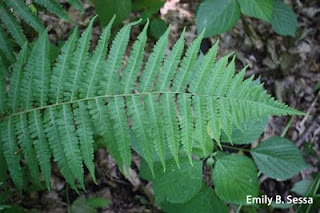 I mentioned in the post on Abraham's Woods ferns that we found a new species there (well, new for that site): Deparia acrostichoides, the Silvery Glade Fern. I got some better photos of it on a return trip and thought I'd share some more about how to identify this fern. It actually sort of resembles Dryopteris goldiana, which it grows right alongside. Both are twice pinnate, but a major difference is that the pinnule lobes of Deparia are blunted and round-ended, while the Dryopteris pinnules come to a point (see photos in previous post). 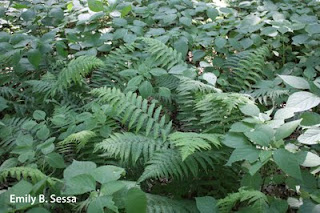 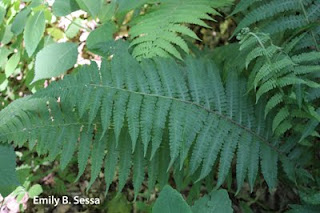 Another character is the hairs: as you can see in the photo below, Deparia has a dense covering of white hairs, which make it look decidedly fuzzy, and it has no real 'scales' to speak of: 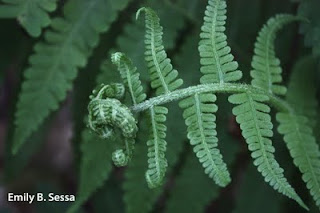 This final shot is of the underside of a frond, which is where the sori should be. Strangely, though, I couldn't find a single frond in the entire population which was fertile. All the other ferns I've seen this year are fertile by now, although the sori are still immature, but this Deparia is totally lacking in reproductive structures. I can't find any information on when it becomes reproductive; maybe this species is just a late bloomer, so to speak. A late sporer? I will be visiting this site again in the next few weeks and I'll keep an eye on it. In any case, this genus is distinguished by having linear sori, similar to Lady fern, along the midveins (costules) of the pinnules. 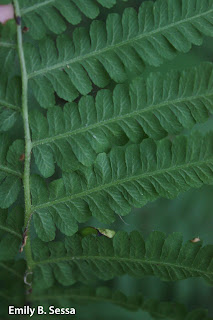