I've been reading an interesting article published last year (2012) in the Journal of Botany (here; subscription required) on "The Evolutionary Dynamics of Apomixis in Ferns". Apomixis is a really interesting process of asexual reproduction that is fairly common in ferns, and involves modification of two critical steps in the life cycle. First, when the sporophyte produces spores, this usually occurs via meiosis and is accompanied by a reduction (by half) of the total number of chromosomes. So if you happen to be a fern in the genus Dryopteris, with a base chromosome number of 41, your diploid sporophytes will have 82 chromosomes, and this will be reduced to the base of 41 during meiosis. If that reduction does not happen and your spores retain the full complement of chromosomes, that is known as diplospory. Those spores will then germinate into gametophytes, and rather than producing eggs and sperm via archegonia and antheridia, respectively, which go on to perform fertilization and sexual reproduction, often no sexual structures are produced at all, and new sporophytic tissue will arise from somatic (body) cells of the gametophyte itself (known as apogamy).

Apomixis and apogamy have long interested botanists because they get at a fairly fundamental question in the evolution of life - is it better to be sexually reproducing or asexually reproducing? There are advantages to both strategies, and I will do a tremendous amount of boiling down here to summarize them thus: sexual reproduction involves many processes that tend to shuffle genetic material and will lead to increased genetic diversity, which will provide raw material for natural selection. If your particular genetic makeup is well-suited to your current environment, mixing things up might not be advantageous, and reproducing asexually will be more likely to allow you to maintain the status quo. As environments change, however, having additional variation will improve the changes that a new genetic combination will be better suited to the new environment. There is a lot more to the story than this, and a huge literature on apomixis and apogamy in flowering plants, and to a lesser extent in ferns, if you're interested.

The authors of the paper I mention above have also put together a website summarizing what's currently known about apomixis in ferns, including a complete list of fern species known to be apomictic. It's a great resources if you're interested in fern reproductive strategies! Here's a shot of the site: 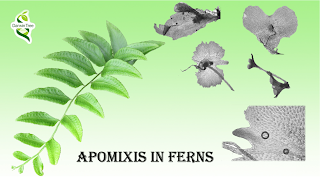